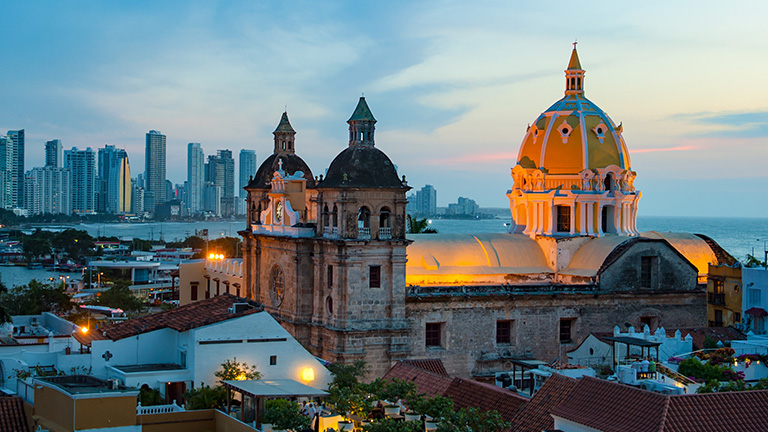 Social unrest and security threats in Colombia are rising, driven by faltering policies in the face of the pandemic-induced acceleration of economic, social, and political crises that pervade the Latin American region as a whole.

President Iván Duque and his center-right government already faced large protests in late 2019 and early 2020. Prior to the pandemic, economic policymaking was focused on high unemployment, the peace process, and the Venezuelan refugee crisis. Open dissatisfaction with institutions had already made Duque’s party lose political control of the largest cities, Medellin and Bogotá, and is now weakening the government as the country prepares for a presidential election in May 2022.

After 20 consecutive years of growth, the Colombian economy shrunk by 6.8% in 2020. The unemployment rate reached a record 16% of the population, with over five million jobs temporarily lost among 51 million inhabitants. By the end of 2020, 42.5% of Colombia’s population was living below the poverty line. The country may not reach herd immunity until the first half of 2022, owing to delays in its inoculation program and supply constraints on vaccine production. As of July 1, the first-dose rollout in Colombia covered about 22.4% of the population, far behind Argentina (36.5%), Brazil (35%), Chile (65.5%) and Uruguay (65.3%).

At the end of April 2021, even as COVID-19 raged and in violation of pandemic lockdown measures, Colombians took to the streets in protest. Demonstrators in Cali, Colombia’s third-largest city, and Valle de Cauca initiated what became a nationwide wave of roadblocks and vandalism. Over the following weeks, demands expanded to include the provision of a guaranteed minimum income, an overhaul of the healthcare system, and an end to police violence.

Estimates show that property claims resulting from damages between April 28 and May 20 in Colombia may have surpassed US$ 624 million (see chart below). Roadblocks have also interfered with the transport of food and supplies, causing shortages in some parts of the country and the deterioration of thousands of tons of food.

Police brutality has also exacerbated public anger, leading to looting, arson attacks, and commercial disruption. In July, 10 members of the military were formally accused of involvement in at least 120 extrajudicial killings and 24 forced disappearances of individuals regarded as guerrillas between 2008 and 2009. This has put pressure on institutions to tackle this issue.

Claims resulting from damage between April 28 and May 20 in Colombia have been made by organization in several sectors.

The country’s fiscal framework is deteriorating, as gross public debt approached 63% in 2020 — a 10 percentage-point increase in 12 months. The IMF granted Colombia a flexible credit line worth US$ 17.2 billion, without conditionality, due to a solid record of prudent macroeconomic management. In December, the Colombian government drew US$5.4 billion from that line, while the Congress approved a US$81 billion budget for 2021 – the largest in the country’s history, indicating Colombia’s fiscal outlook is expected to further deteriorate through 2022.

The government has recently extended some of the fiscal stimulus measures that it implemented in 2020, such as the Ingreso Solidario – a US$2.2 billion cash transfer program to informal workers and families outside existing social initiatives – and the Programa de Apoyo al Empleo Formal, a conditional payroll subsidy. Standard & Poor’s however lowered Colombia’s sovereign rating to BB+ in May 2021, following the withdrawal of a fiscal reform due to protests; Fitch came to the same conclusion in July.

The sovereign rating downgrades have added to a perception of increased political instability. In late June, multiple bullets struck a helicopter carrying President Duque, the defense and interior ministers, and the governor of Norte de Santander when flying through the country’s Catatumbo region towards the city of Cucuta.

The fact that the 2022 presidential election is approaching complicates efforts to reduce tensions. President Duque is barred from a second term; a former contender, left-wing leader Gustavo Petro, is currently leading the race. During previous presidential election campaigns, Petro has advocated the nationalization of the financial sector, and the phasing out of oil and extractive industries, while promoting a strong anti-US stance.

Additional actors that could join forces throughout the campaign period are labor unions and indigenous populations. Colombian labor unions are traditionally moderate, fragmented, and closely allied with traditional parties or the Catholic Church. Membership is historically below 10% of the country’s workforce.

However, union grievances in the transportation, public employees, and oil sectors could cause significant logistical disruption. The oil workers’ union, Unión Sindical Obrera de la Industria del Petróleo (USO), is highly militant and often strikes in solidarity with contract workers. USO has expressed its aspiration to create a “super union” consisting of labor unions within the extractive industry. Progress toward this goal has been limited, but if it succeeds, the likelihood of solidarity strikes across these three sectors would increase amplifying disruption by industrial action.

Colombia’s indigenous population, around 4% of the total, is also organized in a sizeable number of communities. Indigenous people are grouped in some 710 reserves, occupying roughly one-third of the national territory. Environmental authorities dispute the validity of mining licenses granted by previous administrations, particularly in nature reserve areas, and popular consultations in Colombia display a categorical rejection of extractive operations.

Two rulings by the Constitutional Court have recently confirmed the right of the central government to grant extractive concessions, and denied the right of local authorities to block projects, directly or as a result of community referendums. However, a series of conflicts over infrastructure and mining investments have raised concerns that communities may delay projects under the constitutional appeal process.

Overall, the next government is expected to be subject to protests from both unions and indigenous communities, as well as the unemployed, working class, and relevant sections of the middle class. Protests over oil and mining projects are also likely in the near future, as the reduction of local authorities’ powers to block extractive projects, following court rulings, may result in increased protest activities near proposed developments.