Global commercial insurance pricing increased 22% in the fourth quarter of 2020, according to Marsh's quarterly Global Insurance Market Index, a proprietary measure of global commercial insurance premium pricing change at renewal, representing the world's major insurance markets and comprising nearly 90% of Marsh's premium. The increase, the largest since the index was launched in 2012, follows year-on-year average increases of 20% in the third quarter and 19% in the second quarter.

Although the global index increased 22%, the index shows that price increases may be starting to plateau for some lines of insurance in certain geographies. For example, property insurance and directors and officers (D&O) insurance pricing in the US shows signs of moderating increases, and similar trends can be seen in certain property and casualty lines in Continental Europe and Latin America and Caribbean (LAC). Regionally, Continental Europe, Asia, and LAC have now experienced moderate levels of price increases for three quarters.

The average composite price increase in the fourth quarter was driven principally by property insurance rates and financial and professional lines. Among other findings, the survey noted:

In Asia, average prices increased 11% in the quarter, slightly down from the 12% increase experienced in third quarter. 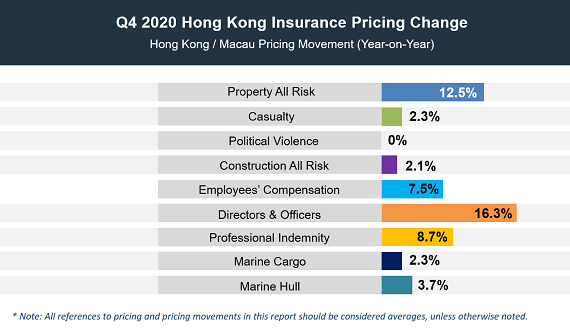