Demand for transactional risk insurance continued to increase during 2015 across all regions as investors looked to reduce deal risk.

Originally used almost exclusively by private equity firms, we have seen a dramatic uplift of corporate buyers using transactional risk insurance to better compete for assets, especially in auction situations. The split between private equity and corporate buyers continues to even out, moving from 61%/39% in 2014 to 56%/44% in 2015, which is a trend we expect to continue.

The Transactional Risk Report 2015 provides details on demand for transactional risk insurance on a regional basis. Key findings include:

Greater awareness of and interest in the coverage from Latin America, driven by cross-borders deals into Latin America from the United States and United Kingdom. 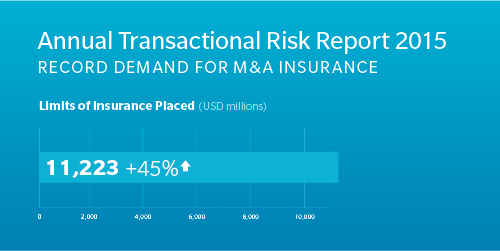