Since mid-2018 the professional indemnity (PI) construction insurance market has seen narrowing coverage and increasing costs for placements and renewals. Some firms are struggling to obtain economically viable insurance terms. Continued rate and premium increases are highly likely in 2020. The COVID-19 pandemic is further stretching the market, although it’s too early to say what the full implications with be.

Premium increases of between 20% and 400% have been seen, with higher excesses applied. Some insurers have made significant cuts in capacity while others have closed down their underwriting teams.

The average capacity per underwriter has dropped from £5million to £2.5million in the past 18 months. As a result, more insurers are needed to complete a layer with increased possibility of more restrictions being applied.

At least eight insurers no longer support UK construction PI risks. Underwriting is selective and generally based upon past claims history, regardless of an insured's future risk profile. Insurers’ focus on costs is leading to under-resourcing in terms of staff numbers, quality, and experience.

Business is being declined that would have been readily accepted at poorer terms 18 months ago. Additionally, underwriters are less willing to take a different approach from their market peers.

Underwriters are no longer happy to deploy their capacity on consecutive layers. For example, if an insurer participates on a primary layer, it will decline the first excess layer and only seek to deploy capacity on the second excess layer. This makes completion of programmes even more challenging, especially when compounded with reduced market capacity.

Policy coverage restrictions with a major focus on cladding and fire safety claims are increasingly common. Alternatively, coverage is restricted to an aggregate limit, with no cover for consequential financial loss (only rectification costs are covered).

There is continued uncertainty about how cladding system losses will impact the market. Insurers are restricting cover in relation to cladding, introducing higher excesses, cladding conditions, and inner limits for specific risks. For new business enquiries where insurers have no historical relationship with an insured, cladding exclusions are more prevalent.

In respect of annual single-project PI insurance, there have been cases of insureds no longer able to comply with contractual requirements due to capacity withdrawal and restrictions in cover previously available. In particular, this has happened where the policies have been historically underwritten on an “any one claim” basis.

After more than a decade of soft market conditions, characterised by plentiful, affordable coverage, the tide turned in 2018. Poor construction underwriting results in 2017 were amplified by big losses in the waste-to-energy sector, followed by claims following the Grenfell Tower tragedy.

In 2019, Lloyd's ordered syndicates to limit the amount of new PI insurance they could write, due to the cover’s poor performance. Cheaper rates were withdrawn, and excess layer premiums rose. Some insurance syndicates withdrew from the construction PI market altogether.

Non-US PI is one of Lloyd's' eight worst performing lines of business and is in the spotlight, not only commercially, but also from a regulatory perspective. The Prudential Regulation Authority, which oversees solvency within general insurance companies, has raised similar concerns. Either insurers must increase premiums to improve profitability or markets are required to withdraw.

While property owners and developers do not generally purchase PI insurance, increased cost and restrictions in cover suffered by contractors are having a knock-on effect as they can no longer provide the same levels of PI coverage and, in some cases, seek to limit their liability under contract.

Examples of the Impact on Contractor 2019 PI Renewals 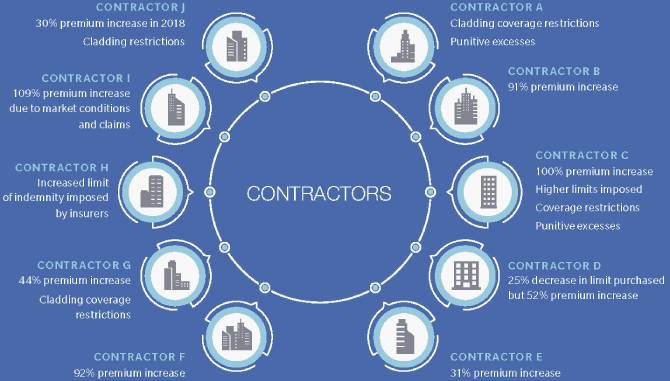 In respect of annually renewable single project professional indemnity insurance, we have seen cases where the insured has no longer been able to comply with contractual requirements due to withdrawal of capacity and restrictions in cover previously available. In particular, this has happened where such policies have historically been underwritten on an ‘any one claim’ basis.

Note that these substantially negative changes are not universal. Terms available to contractors are still very much dependent upon the nature of their work and their claims experience.

Market changes are not universal. Terms available to construction companies are dependent upon the nature of their work and their claims experience. Although some insurance syndicates and companies have withdrawn from the market, new construction insurers may enter the market.

By partnering with their construction insurance brokers and other advisers, companies can positively affect underwriting perception, which can help to limit cost increases, improve risk profiles, and boost balance sheets.

Now is a good time to meet with insurers, forge new relationships and strengthen existing ones. Engage with insurers both mid-term and during market presentations in the run up to renewal. And begin the process early to mitigate any unforeseen challenges.

By optimising its risk management, a construction company can reframe the PI market difficulties as a business opportunity. If risk management helps to contain the cost of PI — which can be one of the biggest costs on a company’s balance sheet — it frees up cash, which can be invested in other areas of a business.

A solid risk profile also differentiates a business from its competitors and improves its credibility with investors, joint venture partners, counter-parties and clients. Good risk management also helps to offset the effect of significant self-insured excesses.