COVID-19 has complicated an already volatile political risk landscape. The geopolitical flashpoints that we highlighted in March 2020 have not gone away.

Given this scenario, Marsh JLT Specialty has published the Political Risk Map 2020: Mid-Year Update, providing risk ratings for 197 countries across nine perils covering the security, trading, and investment environment from January to July 2020. The data is drawn from World Risk Review, our proprietary country risk platform.

Our interactive map is live so you can check the risk ratings for the countries that you are doing business in or considering for the future.

The pandemic’s economic and social impacts are driving significant shifts in global political risk — introducing new dynamics and accelerating existing geopolitical megatrends, such as trade protectionism and the transition to a multipolar world order.

The deepening Sino-American rivalry has accelerated since the onset of COVID-19. The politicization of trade and investment relationships has extended to public health, with leaders in both countries routinely blaming the other for the pandemic.

Cooperation between China and the US on the pandemic has been weak, and tensions have risen over Hong Kong SAR, Taiwan, and the South China Sea. Our expectation that tech firms will be increasingly caught in the crossfire is playing out, while countries find themselves under geopolitical pressure to choose sides.

In July 2020, the UK government announced that Chinese firm Huawei’s technology would be banned from its 5G networks. As the US presidential election approaches, relations are likely to deteriorate further.

Outside of the US-China rivalry, recent months saw a Sino-Indian confrontation in the Himalayas in which at least 20 troops were killed. Tensions on the Korean peninsula also look set to rise, with North Korea severing communication lines with the South and blowing up a joint liaison office in June 2020.

International focus on COVID-19 may also be masking simmering tensions between Iran and the US. Relations between the two countries remain weak, following the January 2020 US drone strike that killed a leading Iranian general.

In July, two US fighter jets approached an Iranian passenger plane in Syrian airspace, and days later Iran’s revolutionary guards fired a missile at a replica aircraft carrier in the Strait of Hormuz.

Almost two-thirds (64%) of the countries in the region experienced an increase in their country economic risk rating of more than 1 between January and July 2020. In the same period in 2019, no country posted a rise of this magnitude. Only 23% of countries posted any increased economic risk.

Many governments across the region face particularly acute debt and fiscal pressures. Almost half (47%) of the countries in the Middle East and Africa have seen their country economic risk rating increase by more than 1 between January and July 2020.

More than half of the countries in the Americas saw their country economic risk rating increase by more than 1 between January and July 2020. Pandemic containment measures have frozen economic activity in many states, while some have faced collapsing tourism revenues, or weak global commodity prices.

Since January 2020, all 197 countries rated by Marsh JLT Specialty’s World Risk Review have seen their country economic risk increase, compared to just 60 countries in the same period in 2019. Moreover, risk ratings have increased by a larger magnitude compared to the same period last year.

The International Monetary Fund (IMF) forecasts that the global economy will shrink by 4.9% in 2020. With many governments looking to ease pandemic lockdown measures, attention is focused on the shape and size of an economic recovery.

A recovery is difficult to forecast, however, given the significant uncertainty over governments’ ability to contain and manage COVID-19, particularly without a vaccine.

Recent weeks have exposed these challenges. While economic data from Europe showed a tentative move toward recovery, fears of a second wave of infections may yet undermine momentum.

As a result, the post-COVID recovery is likely to be uneven across countries and sectors. Countries that entered the crisis with weaker fundamentals are likely to face deeper economic scars, while those able to deploy large fiscal packages and effectively manage the virus are best placed for recovery.

Trade tensions are also likely to amplify, if or when a global economic recovery takes hold. The drivers of increased trade protectionism remain in place, and are likely to be exacerbated by deteriorating US-China relations during the pandemic. The Phase One trade deal reached between the two states is at risk of being abandoned, posing risks to a post-COVID recovery in global trade volumes.

With some exceptions, emerging markets (EMs) will benefit from a recent return to stability in global financial markets, allowing most of them to avoid the severe balance of payments pressures caused by rapid capital outflows.

However, long-term debt sustainability in many EMs will be weakened by the pandemic, as governments deploy additional spending and weak economic activity drags on revenues.

In some cases, such as South Africa, COVID-19 has exacerbated existing weaknesses in public finances, while the simultaneous drop in global commodity prices has also hit many oil-producing nations. 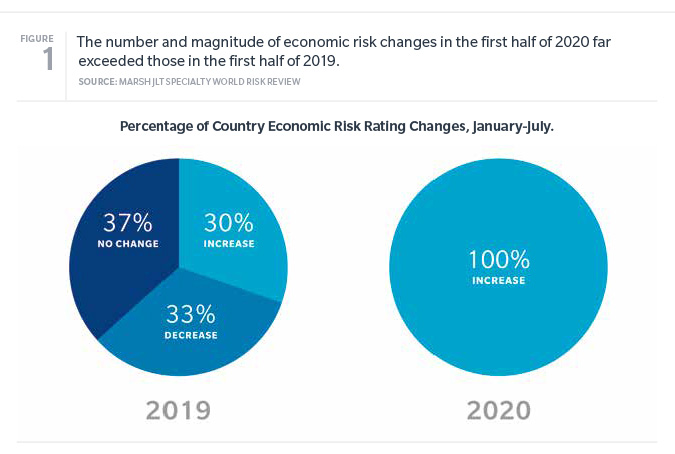 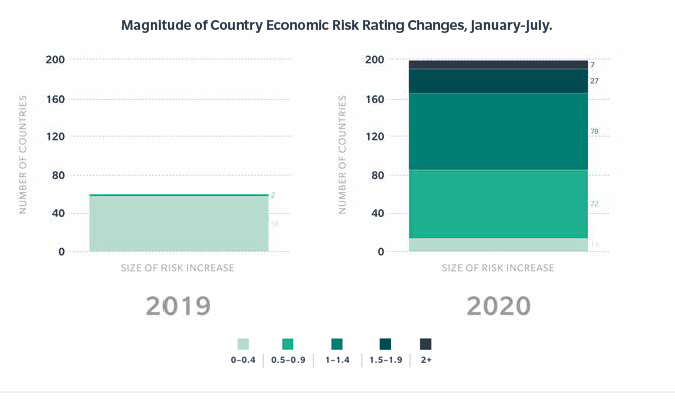 The pandemic is likely to drive rising sovereign credit risks in the coming quarters. Many countries have deployed extensive fiscal stimulus packages to support the private sector, fund additional health care spending, and invest in a post-COVID recovery, all at a time of reduced government revenues.

For many EMs, this will weigh on debt sustainability. In the first half of 2020, one-third of Moody’s sovereign ratings actions related to COVID-19, and all downgraded sovereigns were EMs.

National lockdowns, curfews, and the health risks posed by COVID-19 have limited the risk of civil unrest in recent months. The pandemic’s onset largely froze existing protest movements, with the risk of disruptive protests falling in places like Chile and Hong Kong SAR.

However, the underlying drivers of unrest in many economies — declining standards of living, inequality, and corruption — remain, and in many cases may be exacerbated by the pandemic’s economic impact.

As lockdown measures ease, some protest movements will probably resume, as new motivations for demonstrations emerge. Pre-existing tensions will be exacerbated by growing scrutiny of governments’ handling of COVID-19.

Those perceived to have failed to effectively manage the pandemic could face anti-government protests, increasing the risk of instability. There is a growing risk of disruptive protests in response to the reintroduction of containment measures, as willingness to comply with restrictions wanes. In July 2020, for example, Serbia faced a wave of unrest following government plans to reintroduce weekend curfews and criticism of the government’s handling of the crisis.

In the first half of 2020, the pandemic was accompanied in many countries by a renewed focus on racial inequality and injustice, following the death of George Floyd and others in the US, leading to a wave of protests and demonstrations.

Polling by the Kaiser Family Foundation in June 2020 estimated that as many as 26 million people participated in demonstrations in the three months to June 2020, making it the largest movement in US history.