Pricing for directors and officers liability (D&O) insurance coverage in the US continued to increase into the third quarter of 2019, according to data compiled by Marsh. While rates have been increasing since the second half of 2018, pricing changes for both primary and total D&O programs are now rapidly accelerating. Total program rates increased by at least 14% each month from February through August 2019.

Expanding litigation and regulatory risk combined with profit pressures on underwriters after years of steady premium reductions are prompting underwriters to carefully manage the capital they are deploying for D&O risks. This has diminished competition for buyers and resulted in higher rates and, in some cases, reduced coverage.

A Market in Transition

This market shift represents an acceleration of trends that were first seen in early 2018. After more than 15 years of premium reductions eroding insurers’ profitability, the D&O market—like the overall commercial insurance market — is now in a state of transition. 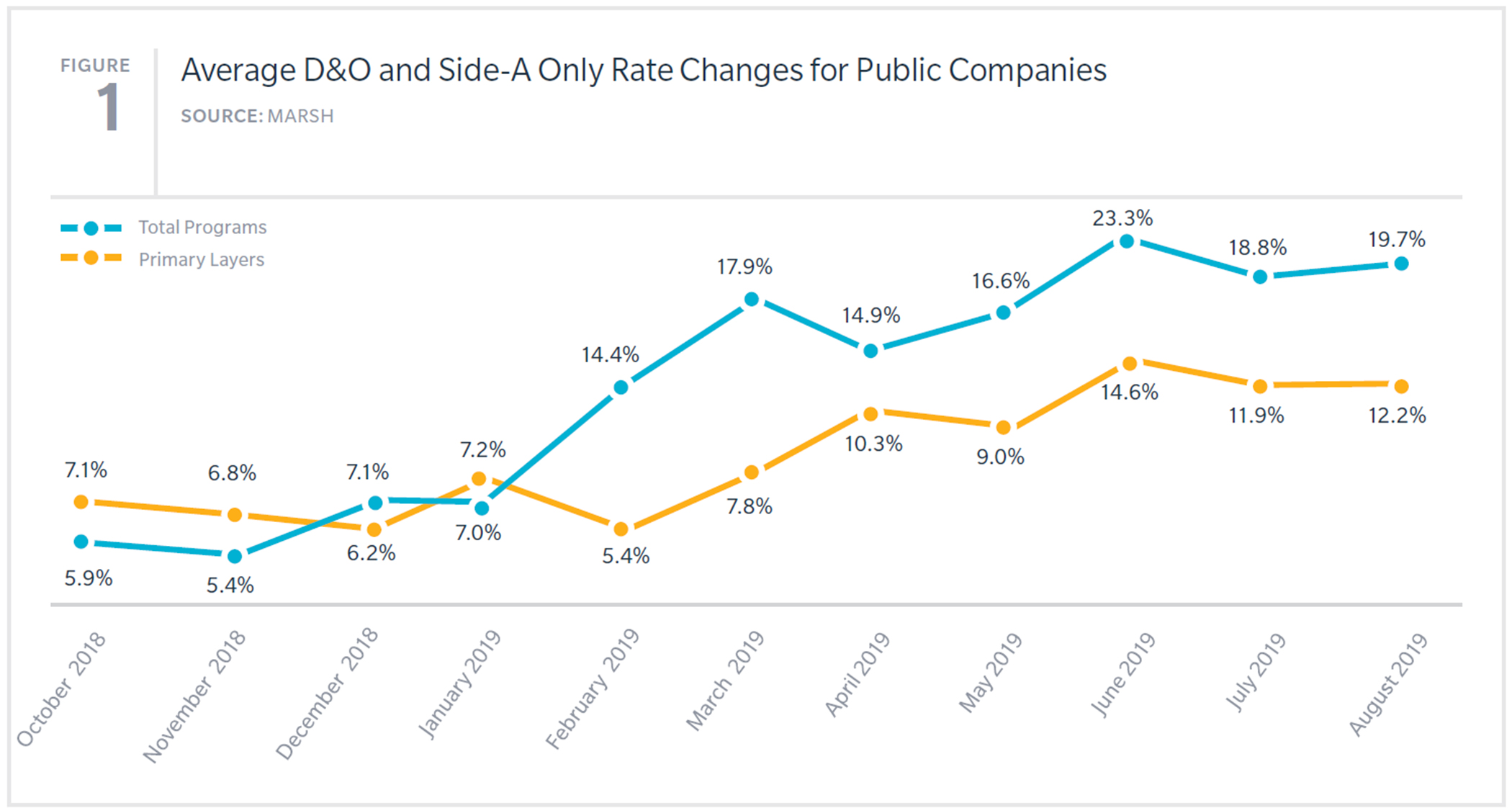 Accumulating losses in recent years have driven insurers to seek rate increases and to push for higher self-insured retentions across their D&O portfolios. Insurers are also actively managing the limits they are deploying, both individually and in the aggregate, which has reduced supply and competition.

While these trends generally apply to the marketplace as a whole, buyers in the communications, media, and technology and life sciences industries have been subject to the most extreme market changes. Insurers are also demanding significantly higher rates for companies engaging in initial public offerings (IPOs) and those with less favorable profiles. Claims history, financial wellbeing, market capitalization, and merger and acquisition (M&A) activity are among the factors that insurers are closely scrutinizing.

Securities litigation and regulation have traditionally represented the biggest components of D&O risk for public companies; those risks have become even more pressing in recent years as a harsh spotlight has shone on businesses — public companies in particular.

According to NERA Economic Consulting, 431 new federal securities class actions were filed each year in 2017 and 2018, representing the most filings in any single year since the aftermath of the 2000 dot-com crash (see Figure 2). The 218 new filings in the first half of this year puts 2019 on pace to exceed even those totals.

Several factors are contributing to elevated litigation risk for public companies. First, plaintiffs’ attorneys are becoming evermore resourceful, and are now able to churn out litigation at a rapid pace. Attorneys are also now increasingly targeting small and midsize businesses rather than merely going after the largest companies.

Second, the impact from the US Supreme Court’s March 2018 decision in Cyan, Inc. et al. v. Beaver County Employees Retirement Fund, et al continues to play out. In Cyan, the Supreme Court ruled that state courts have concurrent subject matter jurisdiction over class actions alleging violations of Section 11 of the Securities Act of 1933. Allowing Section 11 cases to proceed in state courts is concerning for companies, directors and officers, and insurers because they are considered friendlier to plaintiffs than federal courts. State courts generally dismiss fewer cases; Section 11 cases in state court may also take longer to defend and the outcomes could be less favorable to defendants, who cannot avail themselves of procedural protections under the Private Securities Litigation Reform Act (PSLRA). Among other things, this means that targets of state court cases — including companies going through initial and secondary public offerings — could be forced to incur higher defense costs and face costlier adverse judgments or settlements.

Finally, while cases involving accounting misrepresentations and financial restatements have historically made up the bulk of securities litigation, event-driven cases are now making up a large share of the total. Event-driven litigation occurs when an adverse event triggers a securities claim, based either on a stock drop following the announcement of such an event or in the form of a derivative action stemming from an alleged breach of fiduciary duty. Recent event-driven suits have been brought following a variety of adverse corporate events, including sexual harassment allegations, cyber-attacks and privacy breaches, and wildfires.

Beyond growing litigation risk, regulatory scrutiny is also increasing, driven in part by the continued success of the Securities and Exchange Commission’s whistleblower program. In the year ending September 30, 2018, the SEC awarded more than $168 million to whistleblowers, exceeding the total amount awarded in all prior years combined since the whistleblower program was established following the 2010 passage of the Dodd-Frank Wall Street Reform and Consumer Protection Act.

Insurance buyers should understand that recent trends in the D&O market likely do not represent an isolated, one-time market correction. Rather, we expect this to be the beginning of a longerterm market change in favor of sellers. D&O insurers are expected to continue to push for rate increases over the next 12 months and may restrict capacity even further as they continually reevaluate their portfolios. Public companies renewing through the first half of 2020 should expect to face a more challenging underwriting process.

While it is important to plan ahead with renewal discussions starting four to five months prior to policy expiration, it is critical to understand that rate projections will likely change within that timeframe given how fluid the market is. As such, it is important for risk professionals to stay in close contact with their risk advisors.

Buyers should seek to differentiate their organizations’ risks. In a seller’s market, it’s especially important for underwriters to have a clear understanding of the risk your company can present to them, including the potential for costly litigation or regulatory enforcement actions.

Buyers should also demonstrate flexibility during the underwriting process. Be willing to consider changes in program structures, including reevaluating limits, layers, and retention options. In addition, while long-term relationships are generally desirable for D&O programs, consider marketing your program in order to stimulate competition. And finally, be patient with underwriters, who may have limited authority to release quotes before obtaining several layers of internal approvals.