More than half of countries in the Americas saw their country economic risk rating increase by more than 1 between January and July 2020. Pandemic containment measures have frozen economic activity in many states, while some have faced the added challenge of collapsing tourism revenues (Jamaica, Bahamas, and Barbados), or weak global commodity prices (Chile).

The countries covered below reflect the diverse approaches to the pandemic taken in the region. In Brazil, political dynamics are dominated by President Jair Bolsonaro’s laissez-faire approach to the virus, which has contributed to his political isolation.

In Mexico, the federal government has bucked a global trend of large stimulus measures, instead of promoting austerity. Finally, the pandemic has complicated Chile’s political environment — lockdown measures have slowed protest activity, yet a referendum on the constitution due in October may yet yield fresh instability.

Brazil’s political environment in 2020 will be characterized by President Jair Bolsonaro’s handling of COVID-19. The country recorded the second-highest number of reported COVID-19 cases and deaths worldwide in the first six months of 2020. It faces a challenging economic outlook, with the public health crisis and political dynamics likely to mean that an economic recovery will not occur until 2021.

The trajectory of COVID-19 cases in Brazil indicates that the peak of the health crisis is still to come, which will disrupt the resumption of economic activity in the second half of 2020. Bolsonaro has been criticized for the government’s handling of the pandemic, leading to the departure of several political allies. Politically isolated, Bolsonaro will struggle to build consensus with the Brazilian Congress, thereby reducing the likelihood that the government will be able to pass a fiscal reform agenda this year. 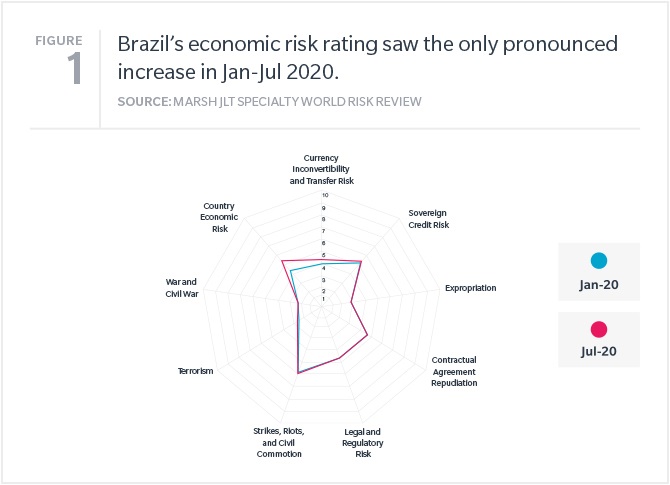 Expropriation risks should remain low, given the government’s ideological commitment to privatization. However, divestments are likely to be delayed by the pandemic.

Brazil’s country economic risk rating increased from 4.4 to 5.4 in the first seven months of 2020 (see Figure 1). GDP contracted by 1.5% in the first quarter of 2020. But the depth of the crisis was felt in the second quarter: Industrial production decreased by 18% in April, following a 9% decline in March.

Business and consumer confidence has also fallen below the levels seen during the 2015-16 economic recession. Risk aversion in global capital markets have put pressure on the Brazilian real, which has depreciated by 33% against the US dollar since the beginning of 2020.

In the next six months, the currency will continue to underperform as a weak external environment weighs on export demand and investment. Brazil’s currency inconvertibility and transfer risk rating increased from 4 to 4.4 between January and July 2020.

The country’s full-year GDP is forecast to contract by 5.2%, given the dramatic disruption to production and consumption in 2020. Falling revenues and a large fiscal stimulus package will weaken government finances, with the fiscal deficit surpassing 10% of GDP and government debt increasing to around 90% of GDP, up from 76% of GDP in 2019.

Chile’s strikes, riots, and civil commotion risk rating increased by 0.5, from 6.1 to 6.6, in the first seven months of the year. This was the largest increase in that risk among all rated countries.

Following unrest in the fourth quarter of 2019, lockdown measures precipitated violent protests in Santiago’s low-income neighborhoods, as shortages of basic goods occurred. In May 2020, protesters erected roadblocks in the neighborhoods of Lo Prado, La Pintana, Maipú, and Ñunoa. Three separate incidents of arson targeting public transport were recorded in the Santiago neighborhoods of Villa Francia and La Pincoya.

Further anti-government protests, and clashes with the police, are likely in the coming months as COVID-19 curfews are eased. Many of the socioeconomic drivers of 2019’s unrest remain unaddressed, and the pandemic is likely to increase pressure for social reforms, as weaknesses in the health care system are exposed and unemployment levels rise.

Chile is due to hold a constitutional referendum on October 25, 2020, which could become a flashpoint for protests. Protests have the propensity to turn violent, with looting of supermarkets and commercial stores a risk.

However, given concerns over social distancing, anti-government protests are unlikely to attract the sustained support that characterized the social unrest in Chile during the fourth quarter of 2019. 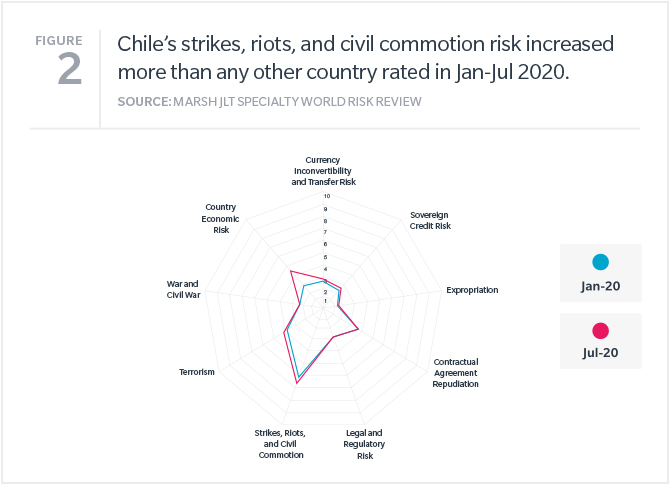 Chile’s country economic risk rating increased by 1.6, from 2.9 to 4.5, in the first seven months of 2020 (see Figure 2). This was the largest such increase in Latin America. The COVID-19-related disruption to key sectors, such as mining and tourism, will cause GDP to contract by 4.6% in 2020, before rebounding in 2021.

President Sebastián Piñera announced three months of fiscal stimulus in June 2020, expected to total 10.2% of GDP (USD28.8 billion). Chile will partly finance additional spending through the issuing of new debt, which is forecast to double from approximately 20% of GDP in 2019, to 40% of GDP in 2021.

However, Chile will benefit from relatively low borrowing costs on capital markets, ensuring that its sovereign credit risk has only moderately increased from 2.4 to 2.6 in 2020 to date.

Chile’s structural dependence on commodities will impede a quick recovery. Copper continues to represent close to 50% of its exports. Following an outbreak of COVID-19 in Chile’s northern mining region, a state-owned mining firm suspended construction at several of its facilities in June 2020, as did several private sector mining firms. In August 2020, the firm announced the first stages of recommencing these projects as the country begins to ease lockdown restrictions in certain communities.

The pandemic weighed on Chile’s exports in the first half of 2020, widening the current account deficit to around 3.4% of GDP by year-end 2020. However, Chile’s large stock of international reserves, and increased copper demand from China, should relieve pressure on the balance of payments in the second half of 2020.

Chile is due to hold a referendum on constitutional changes in October 2020, generating some uncertainty over the country’s business-friendly operating environment and legal framework. The referendum follows 2019’s civil unrest, which renewed focus on social policies, instead of pro-business reforms.

Mexico’s economy has suffered from the triple shock of COVID-19, low global oil prices, and a collapse in US consumer demand in 2020. Its country economic risk rating increased from 3.8 to 4.6 in the first seven months of the year (see Figure 3).

In the first quarter of 2020, GDP contracted by 1.6%. Over the full year, GDP is forecast to contract by up to 8.8%, although a deeper contraction remains possible. Mexico’s trade relationship with the US is crucial to the country’s overall economic health. The two countries are each other’s largest commercial trade partners: bilateral trade reached a record USD614.5 billion in 2019.

In 2020, the COVID-19-related closure of factories that connect value chains between Mexico, the US, and Canada will negatively affect production and exports in key sectors such as electronics and automobile manufacturing.

In the first quarter of 2020, industrial production posted a 3.2% year-over-year contraction. At the peak of the COVID-19 crisis in Mexico, from March to April, exports declined from around USD20 billion to USD12.5 billion. 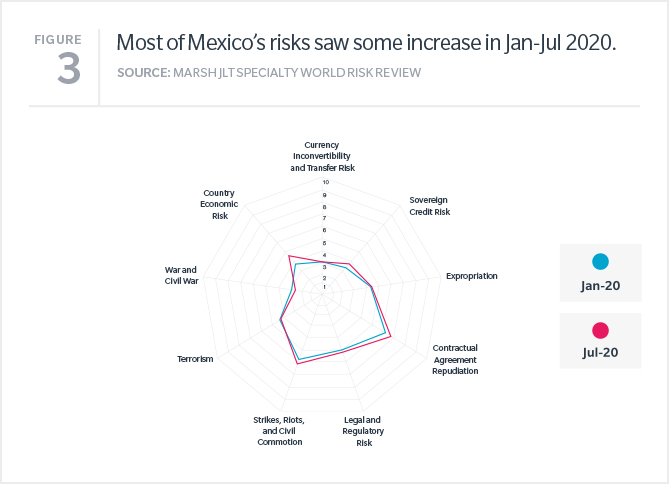 In contrast to many governments globally, the federal government has not offered a large fiscal stimulus package in response to COVID-19’s economic impact, instead promoting fiscal austerity. The federal government has rejected proposals for additional support, including a temporary reduction in VAT. The absence of government support could be another shock to the Mexican economy, and is likely to prolong the economic downturn.

However, the United States-Mexico-Canada Agreement (USMCA) should provide some upside potential to Mexico’s economy in the coming years. Becoming effective on July 1, 2020, the USMCA replaced the North American Free Trade Agreement (NAFTA), and will provide certainty to Mexico’s regional trading arrangements in the latter parts of 2020.

However, the USMCA contains sunset provisions, requiring joint committees to review its terms every six years. This may lead to renewed bouts of trade uncertainty in the long term.

The federal government shows little sign of abandoning anti-business policies, and the policy-making environment will remain unpredictable in the remainder of 2020. In recent months, the government has taken a particularly active stance in the hydrocarbons and power industries, as the federal government looks to promote energy independence from foreign investors.

The federal government aims to boost the state’s role in the sector, while reducing the role of private investment, which has grown since Mexico’s historic energy reforms in 2014. An April 2020 directive prevented a number of renewable power plants from connecting to the state-operated electricity grid, stating that they did not contribute sufficiently to transmission costs. As a result, Mexico’s legal and regulatory risk rating increased from 5 to 5.2 between January and July 2020.