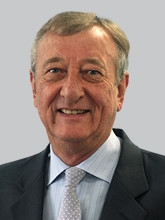 Mr Mouat has worked for American International Group for 32 years in a number of senior management positions before joining Marsh Vietnam in 2013 as Chief Executive Officer.

At AIG, he held the following positions.

In 2006 his role was expanded to include Hong Kong, Taiwan, China and AIG’s investment in PICC. Lead a team of over 6,000 employees in a multi- billion dollar region, achieving consistent growth in both revenue and earnings.

Mr Mouat also represented AIG at US ASEAN Business Council, APAC, guest speaker at a number of industry conferences and awarded Asia Insurance Review “ Personality of the Year “ in 2011 for services to the insurance industry. From 2010 to 2013, he served as Chairman for AIG Asia-Pacific Region covering 16 countries, 22,000 employees and 11 billion dollars in revenue.

From 2013 to present, Mr Mouat is serving as the Chief Excecutive Officer in Marsh Vietnam.