The pandemic had a significant impact on Sub-Saharan African economies in 2020, with growth contracting by 3%. Despite this, the region is still predicted to generate growth of 3.1% in 2021, if countries can navigate significant obstacles. Chief among these is careful management of fiscal and monetary policies at a time when many governments have limited resources. Metal- and oil-exporting countries in the region have been the most affected by COVID-19; countries that rely heavily on tourism also have been severely impacted. More diversified economies, such as those of Côte d’Ivoire and Kenya, have fared better.

Pandemic-induced economic stress saw poverty levels across the region increase to 41%, with forecasts indicating it is set to rise another 1.2% this year. When combined with infrastructure and development challenges as climate change ensues, it will be difficult for major infrastructure to be completed without outside investment.

One positive feature of the pandemic response was the significant financial support many countries received from multilateral institutions such as the IMF, African Development Bank, and African Export-Import Bank. These institutions provide countercyclical lending at more affordable rates than private markets can offer, and they provide significant lending programs to help countries through the economic and health impacts of COVID-19. Unfortunately, the aid just may not be enough to forestall a lost decade for the countries of the region.

A looming concern highlighted by the pandemic is the difference between the interest due for government debt between developed-market and emerging-market economies. Whereas the overall servicing of interest on debt has reduced globally, it has increased for emerging economies. The percentage of 2020 S&P sovereign credit downgrades by region illustrates the heavy impact on Sub-Saharan Africa. 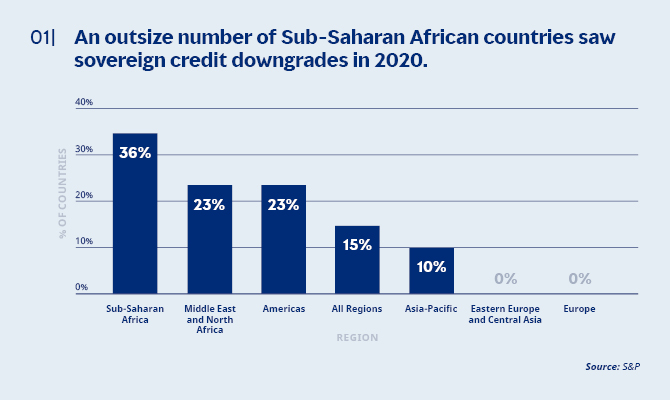 This means that although developed and emerging economies may have similar debt-to-GDP ratios, they have vastly different interest debt burdens. This imbalance may lead to further sovereign defaults such as the one seen in Zambia in 2020. The increase in interest repayments will also take up more and more of government budgets, making it harder to spend money on COVID-19 responses.

The emergent East Africa-Eastern European economic corridor will be reliant on both rail and road connectivity. Over the last year, Egypt and Sudan signed a new transport agreement, which will formally create rail connections between both countries. The first rail link will be funded by Kuwait, further demonstrating the strong importance Sub-Saharan Africa holds for external actors.

The Trans-African Highway, spanning from Cape Town to Cairo, also serves the ambitious plan well. However, the ensuing conflict between Egypt and Ethiopia over the Grand Ethiopian Renaissance Dam (which will severely reduce Egyptian access to freshwater from the Nile), coupled with the ethnic-driven insurgency in Ethiopia’s Tigray province, pose significant perils to Trans-African Highway users.

Despite the above issues, there is cause for optimism because Africa has been affected less than other regions by the pandemic. Low interest rates in Western economies could encourage institutional investors to chase higher yields on the continent. The African Continental Free Trade Area (AfCFTA) may also be a conduit to accelerated development provided that infrastructure projects maintain access to finance.

The size of China’s GDP is likely to grow by about US$2.3 trillion next year and beyond, equaling the size of the entire African market. This growth could help drive commodity price increases and provide a huge lift to the African continent.

Côte d’Ivoire’s rapid economic growth and ambitious infrastructure program should continue to generate investor interest, but the risk of terrorism and political violence is intensifying. In October 2020, the current president was elected to a third term in a controversial election that saw dozens killed during violent political conflicts and the arrest of some political opponents. Despite a largely investor-friendly approach, political intervention and corruption are persistent issues for businesses in Côte d’Ivoire.

COVID-19 has affected the Ivorian economy less than others in the region, though the economic downturn may increase the potential for social unrest. The country’s response to the pandemic relies on its military and police, which are frequently occupied combating the terrorism threat, including deployments in neighboring Mali and Burkina Faso. As a result, terrorists such as al-Qaeda in the Islamic Maghreb (AQIM), ISIS, and other insurgent groups are conducting attacks inside Côte d’Ivoire, with military and infrastructure targets at high risk. Reflecting this reality, terrorism had Côte d’Ivoire’s largest WRR rating increase, reaching 5.9 in January 2021, up 25% from January 2020. 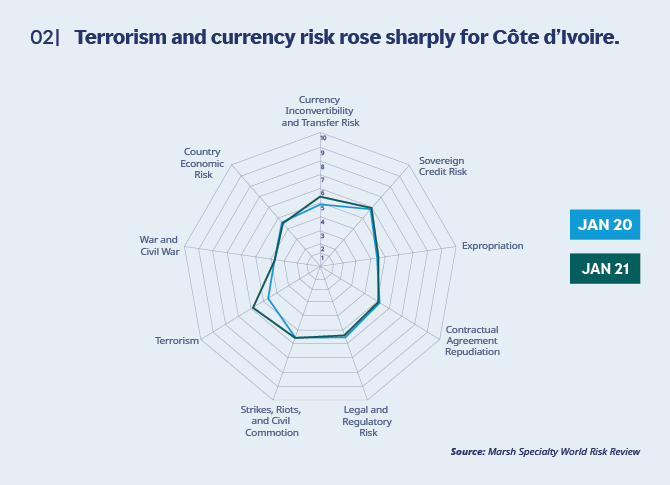 Nigeria’s economy faces a future of slow growth and recovery after a sharp contraction in 2020. Its GDP is forecast to grow between 1.1% and 2% in 2021, with recovery largely dependent on the price of oil, which generates 50% of government revenue and 90% of foreign exchange earnings, success in vaccinating its population, and the government’s ability to restore law and order over insurgent groups threatening the economic recovery.

The oil price drop has deprived Nigeria of funds to improve its poor healthcare infrastructure and provide resources to its army, which is struggling to counter attacks by terrorist groups on civilian and military targets. A reported alliance between Boko Haram and ISIS will keep the risk of terrorism high, while widespread outrage in rural areas over terrorist attacks may lead to social unrest.

The Central Bank of Nigeria took steps to protect the nation’s banking sector from the impact of COVID-19 via quantitative easing, debt moratoriums, devaluation of the naira, and cuts in interest rates. Nigeria’s high cost of external borrowing, combined with poor revenue generation and little to show in terms of capital expenditure, remain major concerns and are reflected in the increased risk ratings across these areas.

Like many African countries, Nigeria has been strategizing how to take advantage of the African Continental Free Trade Area, which commenced trading on January 1, 2021, and is predicted to create a US$3.4 trillion economic trade bloc. This new area should facilitate the expansion of intra-African trade and new trade routes for Nigeria’s growing domestic industries, such as cement, fertilizer, and refinery businesses. However, a smooth transition for Nigerian businesses will require close cooperation between the public and private sectors.

The scope of Islamic militia to proliferate attacks within Nigeria has markedly increased against a poorly resourced Nigerian army that, in recent times, have been on the front line of the state’s response to COVID-19 pressures. The attacks on convoys, inclusive of the destruction of weapon deliveries, appear to coalesce well with the aims of undermining the tactical and operational capability of troops. Further, the diversion of resources to alleviate the COVID-19-induced economic collapse that Nigeria has faced (due to the reduction in the price of oil) suggests the Nigerian army is not well-positioned to form a concerted plan of action to mitigate against this threat.

Insecurity is also likely to remain a central issue in southern and coastal areas, which is likely to reduce foreign investment in a diminishing oil sector. As militant groups continue to threaten oil installations in the Niger Delta, a breakdown in negotiations between the militants’ representative body — the Reformed Niger Delta Avengers — and the federal government in January 2021 means that groups have threatened to escalate the frequency and potency of attacks on vital pipelines and shipments.

In recent months, oil companies have declared force majeure following attacks on assets held in the Niger Delta. Logistics companies also face security threats from pirate groups that hold bases along the coast. Recent data from the International Maritime Bureau indicates that 2020 saw a steep rise in piracy, with the Gulf of Guinea accounting for approximately 95% of all incidents of kidnapping crew members globally. 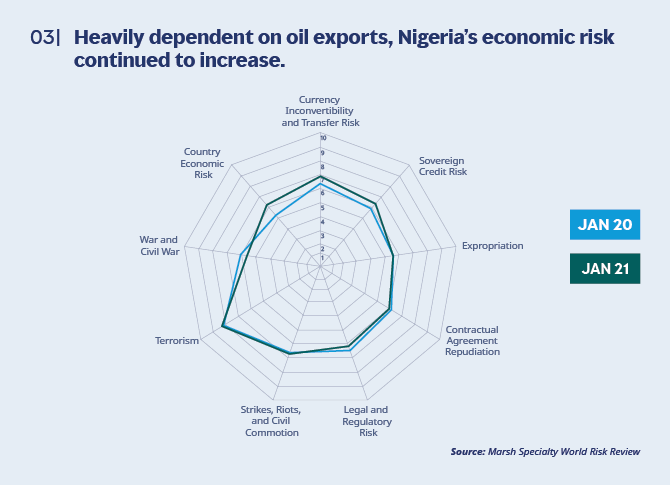