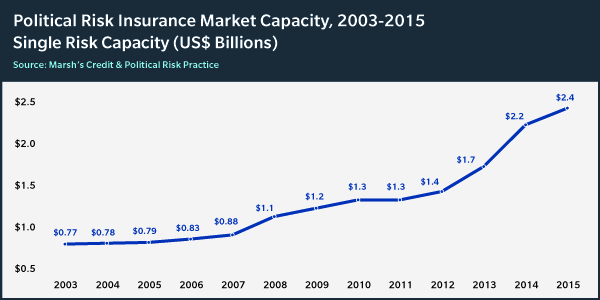 Despite growing concerns about global political and credit risks, strong competition among insurers is driving prices to an all-time low.

With capacity at an all-time high and prices at an all-time low, corporate boards and risk managers should consider how they can protect shareholders from potentially catastrophic exposures, including political risk and terrorism attacks that can rapidly change from a small-scale event into a full-blown crisis, potentially across multiple countries.

According to the US State Department, the number of terrorist attacks in 2014 increased 35 percent.

1. Is there a market for political risk insurance given today’s volatile environment?

The market for political risk is well-capitalized, robust, and growing, with a mixture of private insurers, Lloyds syndicates, and multilateral organizations, such as The World Bank’s MIGA, and the Asia Development Bank. There is approximately $3 billion in capacity for assets and investments against expropriation, political violence, currency inconvertibility per risk or transaction. There is also approximately $3 billion of capacity for contract-related risk, such as sovereign nonpayment and other political risks.

2. How should companies approach their political risk insurance program?

A broad, multi-country and multi-hazard approach to managing political risks remains the most practical and effective political and credit risk strategy for multinationals. Multi-country political risk insurance policies can provide blanket regional or global coverage, often with more favorable terms and conditions than are available via single-country policies.

3. Is cover available for non-physical assets, such as contracts?

Credit or non-payment risk closely follows political risk. Both governments and private companies often lose the ability to honor financial obligations as a result of political unrest. Suppliers or lenders to buyers based in less stable markets should consider purchasing structured credit insurance, which can cover transactions or contracts with a tenor of between one year to seven years.

Global Risks Facing the World in 2015