Is This the End of Globalisation?

Political events in 2016 gave rise to increasing nationalism and populism globally. Combined with a global slowdown in economic and trade growth, international integration may already have plateaued, and could begin to reverse over the coming decade. Multinational organisations should prepare for potentially significant implications by carefully considering the political threats in the countries in which they operate.

As Resistance to Globalisation Grows, Nationalism and Populism Gain Traction

Chief among them were the UK’s referendum vote to leave the EU and the election of Donald Trump, who won after running on an anti-establishment platform heavily focused on a nationalistic agenda. At the same time, China, Japan,

India, Russia, and Turkey are being led by what many consider to be their most nationalistic and protectionist leaders in decades.

Such sentiments are reflected Marsh’s Political Risk Map 2017. Drawn from annual analysis conducted independently by BMI Research, Marsh’s Political Risk Map presents a global view of the issues facing multinational organisations and investors. The map rates countries on the basis of political and economic stability based on a score out of 100, in which the higher the score, the more stable the country is rated. This gives insight into where risks are most likely to emerge and what to be aware of in each country in which a multinational company may have operations. Using this methodology, Russia dropped approximately 6% in its short-term economic risk index score when compared to the previous year. For China, Japan, India, Turkey, and even the United Kingdom, long-term economic risk scores dropped by as much as 10%. 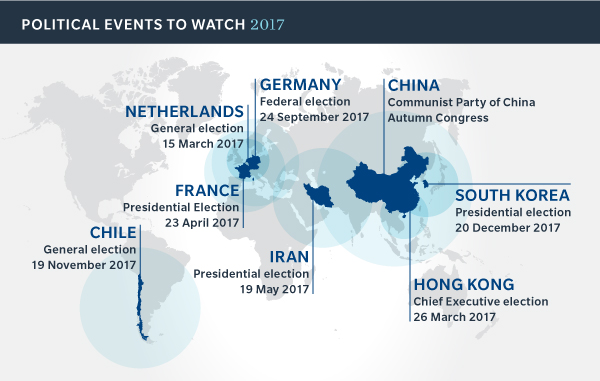 While a slowdown of global trade and economic growth will undoubtedly impact companies’ income, businesses should also prepare for a shift away from globalisation.

Given the complex implications of “peak globalisation,” companies can prepare by formally documenting the countries with which they interact – whether from the perspective of investments, workforce, or supply chains – and assessing the associated economic and operational risks, using indices such as Marsh’s Political Risk Map 2017.

Populist forces have recently defied expectations. Businesses should look beyond consensus forecasts and prepare for a broader range of potential outcomes and operational risk scenarios. They will also need to reframe how they view risk, keeping an eye on global developments that have implications down the line, and prepare to adapt their business models to what could be a vastly different “post-globalisation” operating environment.

Is This the End of Globalisation?