Catastrophe Modeling: Why All the Fuss?

Just five years ago, a mention of catastrophe (CAT) modeling may have induced many quizzical stares, all asking: What is that? Now CAT modeling for hurricanes and earthquakes has become the norm in property underwriting and is considered a ”must have” for insureds to better understand their risk.

In early 2011, RMS released an update to its software—Version 11—which became a major industry and insurer event. The new model takes into account lessons learned from several major wind events that occurred after RMS v10, in which the changes were driven by earthquake, not wind. Hurricane Ike and several other wind events led to significant model changes.

The updated model also increased insured loss results in a range from 20% to 100% or more. Some loss estimates in Texas and the mid–Atlantic states doubled, while smaller increases were seen in Florida. The model dramatically increased storm surge potential for coastal properties and classified areas in the Northeast as exposed that had not previously been considered exposed.

Insureds often use CAT models to guide them as to what sublimits they should buy for hurricane (windstorm) and earthquake exposures. Typically, insureds look to buy to the 1-in-250-year return period, which is the generally accepted return period. More conservative returns of 500 or 1,000 years also can be used.

All models produce data in the form of tables. The RMS table (illustrated in Figure 1) helps clients to understand what the expected losses may be from various CAT events; thus, helping insureds or insurers set acceptable program sublimits. 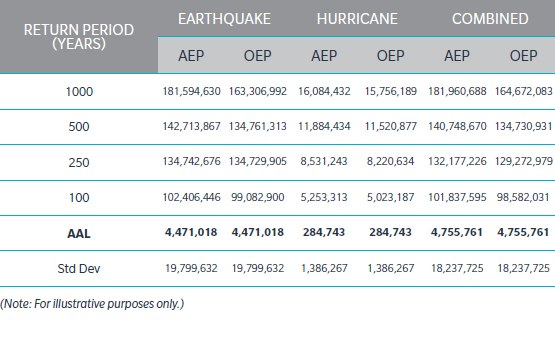 Insurance brokers use the modeling results to help design the program structure, as modeling can be performed on each individual layer as well as the overall program. This allows brokers to analyze various options, such as insureds self insuring layers that may be too costly or transferring risk to various insurers where they see value and efficiency in so doing.

Additionally, modeling allows brokers to look at annual average loss (AAL) figures, which are the minimum annual charge (premium) over an infinite time period that would need to be collected to fund for the expected loss: This is often referred to as the “technical premium.” Carriers often use a multiple of this figure to determine the actual annual premium charged. Accordingly, comparing a company’s AAL for earthquake and windstorm perils versus the actual premium paid can help clients determine how well priced (or not) their program is overall.

The rating agencies use modeling to assess catastrophe risk as a primary threat to an insurer’s solvency. They run the models on an insurer’s aggregate exposure, which, depending upon how exposed an insurer is, may impact its rating. As of September 2012, all US property carriers have implemented the new version of RMS 11, assuming they use RMS modeling, and their ratings reflect such.

Insurers use the models in a similar way to insureds, brokers, and rating agencies: to help them understand loss expectancy, AAL pricing, exposure to their capital base, and risk aggregations. RMS v11 has had the effect of significantly increasing aggregations and the amount of capital insurers need to have on hand.

RMS v11 has been considered to be the equivalent of a $25 billion to $35 billion capital event in the property market, which in turn has led to an increased cost of doing business in CAT-exposed areas as insurers need to maintain higher capital adequacy ratios as measured by the rating agencies. This has led to carriers raising more capital, raising premiums, reducing their portfolio accumulations in high CAT areas, and/or purchasing more reinsurance.

It is also important to mention that an insurer first models a risk on its individual characteristics, producing the table similar to Figure 1 above, to determine natural risk break points as well as probable maximum loss (PML) and AAL estimates. An insurer then runs the model of this new insured against its entire portfolio of risks to see how this new risk impacts its portfolio exposures and aggregations. As such, an insurer looking at a new risk with heavy wind exposures whose portfolio is already heavily wind exposed will likely charge a higher premium for that new risk as opposed to an insurer whose portfolio is not so wind exposed. This helps to explain why there can be such a difference between various insurers’ pricing for the same risk.

Modeling is all about the data. Models are sophisticated, but depend on the information given to them. For example, differences in how buildings in a similar location are constructed may respond to the same event differently (e.g., a brick building may fare better in a windstorm than one made of wood). Models are capable of developing loss levels for a range of building types, ages, sizes, and occupancies.

Marsh is able to provide clients with two of the three most used models—RMS and AIR—which support a wide range of risk management applications. 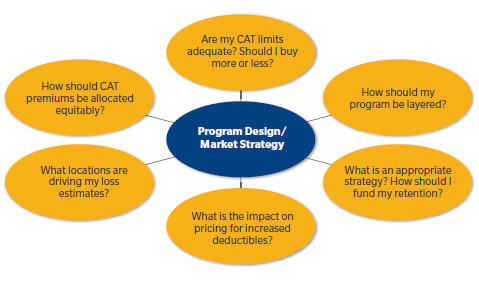 Models can accommodate extensive additional refinements through secondary modifiers beyond the required primary attributes, or data. It is essential that the data be accurate, as if it is not the model will produce inaccurate results, potentially affecting pricing, capacity offered, and limits purchased.

What if data is missing? The models can accommodate missing information to some extent; however, this increases the uncertainty around the modeled results. The more uncertainty, the more compensation in terms of the premium that insurers will likely need.

Models also “keep score” and look at a number of factors based upon the primary and secondary attributes provided. A “bad” score in any one of the categories noted in Figure 3 can hurt an insured both in relation to pricing, capacity, and limits purchased, and in an insurer’s confidence that the insured understands its risk.

In the example provided, the secondary modifiers score is poor at 11%, and knowledge of locations’ construction types could be improved from 89%. Conversely, the geocoding and occupancy scores are quite high, demonstrating the insured’s understanding of these categories. 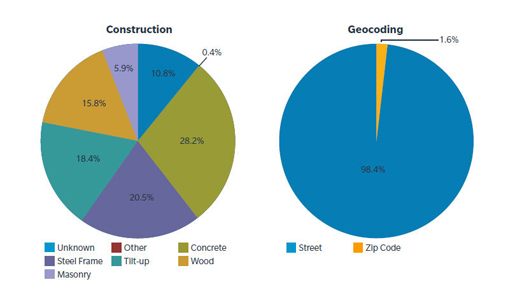 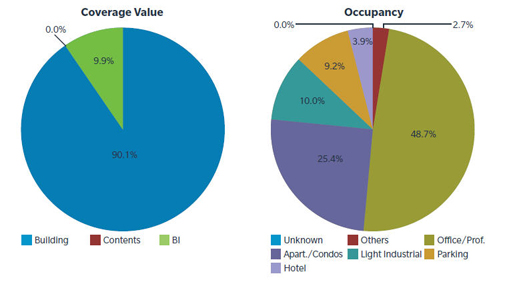 For additional information, or to request a model of your properties, please contact your Marsh property broker or other Marsh representative.

Business Interruption Insurance: 8 Terms to Help You Understand What is Covered