Changing weather patterns are affecting businesses across all industries. In 2019 alone, the US experienced 14 weather and climate events where losses exceeded $1 billion, the fifth consecutive year with 10 or more billion-dollar weather events. In the first six months of 2020, there were more than 12,000 severe weather events in the US. And this trend is unlikely to reverse itself any time soon. Both extreme weather and natural disasters were listed among the top three risks by likelihood in the Global Risks Report 2020, prepared by the World Economic Forum with the support of Marsh & McLennan.

For many organizations, this is a major conundrum: Not only do they face growing insurance costs, but the COVID-19 pandemic has left many businesses financially fragile. Another costly hit, in the form of a natural disaster or another catastrophe, could be devastating and potentially crippling.

While traditional forms of insurance remain the first line of defense for most organizations, these products do not always sufficiently cover certain losses. The pandemic has highlighted many potential gaps, as a number of businesses have found that their traditional insurance policies will not respond to the enormous business interruption losses they’ve sustained.

The same can happen following a major natural disaster. Let’s take, for example, a hotel on a hurricane-stricken Caribbean island. Due to sustained investments in mitigation, the hotel itself manages to avoid major physical losses. But the surrounding areas, including transportation hubs, suffer substantial damages, leading to a significant drop in the hotel’s guest bookings and its revenue. However, without any major physical losses, the hotel’s property insurance policy doesn’t cover the lost income due to business interruption.

Other businesses around the world have found themselves in similar situations, suffering financial losses but lacking sufficient coverage. And since extreme weather events are increasing in both frequency (see Figure 1) and severity, businesses could face one or more natural catastrophes and continue to experience financial strain at an already difficult time. 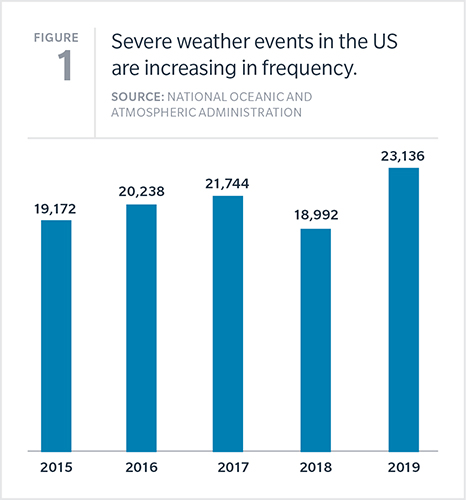 New Solutions for a Widespread Challenge

These bespoke products — also referred to as event- or index-based solutions — are custom-built to fit an organization’s specific needs and cover a predefined event. The predetermined payout mechanism is not dependent on losses sustained; instead, parametric solutions are structured around a transparent third-party index, such as hurricane wind speed at or within a predefined geographical area or the magnitude of an earthquake and location of its epicenter.

Let’s return to our example of a Caribbean hotel. In addition to a standard property policy, the hotel purchases a parametric solution with a trigger based on hurricane wind speed within a 50-mile radius from the property. When the wind speeds — as measured by the agreed third party — breach the trigger, the hotel receives its payout, despite not sustaining physical damage.

Of course, the hospitality industry isn’t the only one challenged by changing weather patterns. Agriculture, infrastructure, transportation, energy, manufacturing, real estate, as well as the public sector can also suffer tremendous damages from such events. And damage can be caused by more than just natural catastrophes — a warmer-than-normal winter can lead to revenue challenges for snow removal companies and power providers, while lower rainfall can affect farmers’ crop outputs.

Sustained increases in commercial insurance prices coupled with a recognition of a growing risk spectrum are piquing the interest of organizations and prompting many to add parametric solutions to their insurance portfolios. This is especially true for certain risks, such as hailstorms and wildfires, for which it’s becoming increasingly difficult and expensive to purchase traditional coverage.

While parametric solutions will likely never fully replace traditional coverage, index-based products can address a major pain point often associated with traditional insurance: the lengthy and often cumbersome adjudication process that can leave companies in financial limbo during an already frantic and difficult time. Index-based solutions, unlike traditional policies, will pay if the predetermined trigger is breached, typically with minimal to no need to present proof of losses. And, most important, payouts tend to take place quickly, allowing the recovery process to commence sooner.

Another benefit is the bespoke nature of parametric solutions. Instead of a one-size-fits-all approach, these products are customized to an organization’s needs, focusing either on one specific risk or a combination of risks through multi-trigger programs that merge different parameters. An example is a solution based on hurricane wind speed and storm surge measurements that may affect a single or multiple locations along the coastline.

As the economic effects of the pandemic persist, many companies have shifted to cash-preservation mode, reviewing their expenses and cutting unnecessary costs. But this may also be the time to take the necessary steps to improve your resilience to unexpected catastrophes, putting systems in place to protect your assets and make sure you have the financial means to rebuild and recover following a disaster.

Download the entire report and learn more about how changing weather patterns are affecting businesses across all industries. 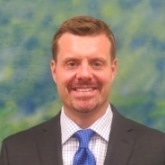 US and Canada Risk Analytics Leader 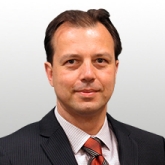