Hurricanes. Earthquakes. Wildfires. Record catastrophe losses in 2017 and 2018 have turned the tide of property insurance pricing, which had been trending downwards for several consecutive quarters.

Insured catastrophe losses hit a staggering $150 billion in 2017, making it the worst year on record. While this was seen as a wake-up call for insurers, property insurance pricing — which had steadily dropped amid a soft market for several years — was still largely inadequate to fund the more than $80 billion in insured catastrophe losses suffered in 2018. The message from insurers was clear: The relaxed underwriting standards and pricing flexibility that had become somewhat common was due to change.

This has led to a new reality for many businesses, including retailers. While still-ample capacity means that there have been relatively few challenges in placing programs, increasing premium costs and greater underwriting discipline are driving some retailers and restaurant companies to take a closer look at their portfolios and consider alternative ways to finance  their risk.

Growing interest in alternative solutions is coinciding with an increase in available alternative capital options for buyers. According to Guy Carpenter, alternative capital stood at $95 billion at the end of last year, increasing by about 9% through 2018, following a 16% growth the year before. And capital owners, including private equity funds, sovereign wealth funds, hedge funds, and pension funds, have reportedly earmarked an estimated $1 trillion for investment in risk finance.

Changing underwriting practices are driving some retailers to look for alternative ways to finance their risk. In fact, 30% of retail, wholesale, food, and beverage (RWFB) respondents to the Excellence in Risk Management survey said they either use or have used alternative risk transfer (ART) solutions or plan to do so in the coming two years (see Figure 1). Close to half of industry respondents said they could use alternative solutions to manage property catastrophe risk and finance hard-to-insure exposures (see Figure 2). 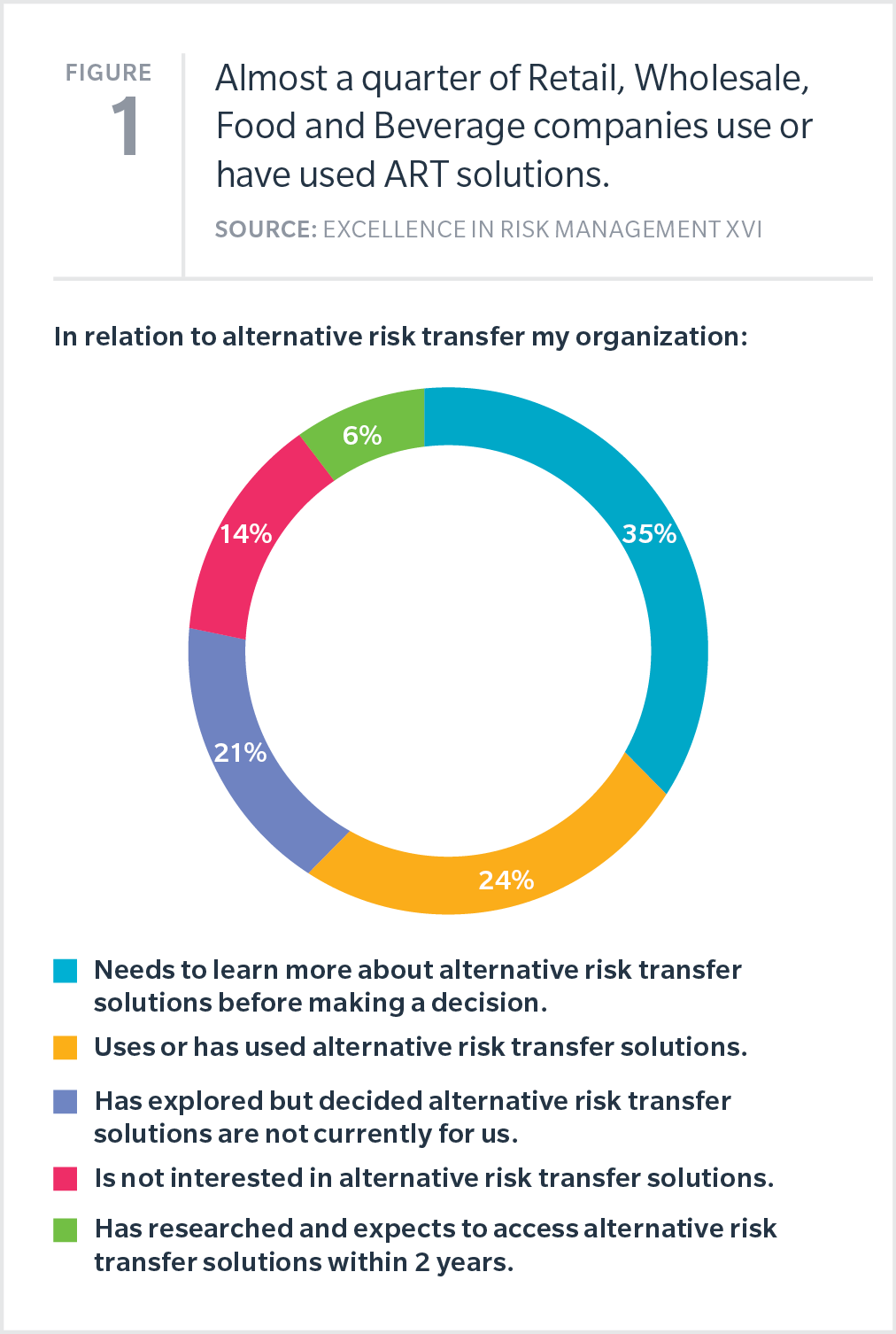 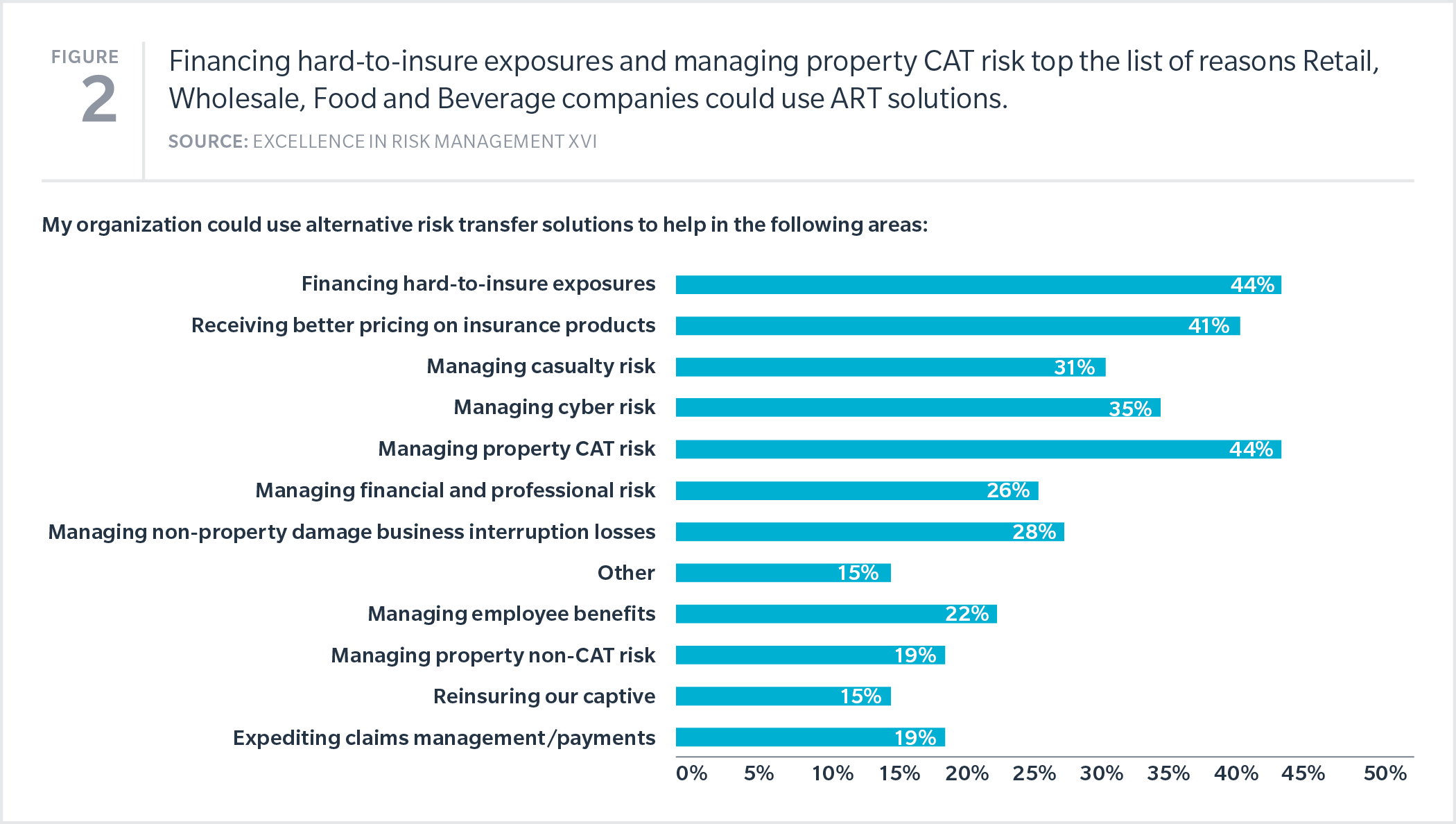 Captives were by far the most popular option, cited by 80% of industry respondents whose companies use or have used alternative risk transfer solutions, followed by structured and integrated risk programs (see Figure 3). Captives are mainly being used to fund deductibles, while some retailers are leveraging multi-year single limit programs to cover excess catastrophe exposures. One retailer is looking at inserting its captive as a quota share player to reduce the overall premium increase on its program, which can also help as a negotiating tactic with insurers. 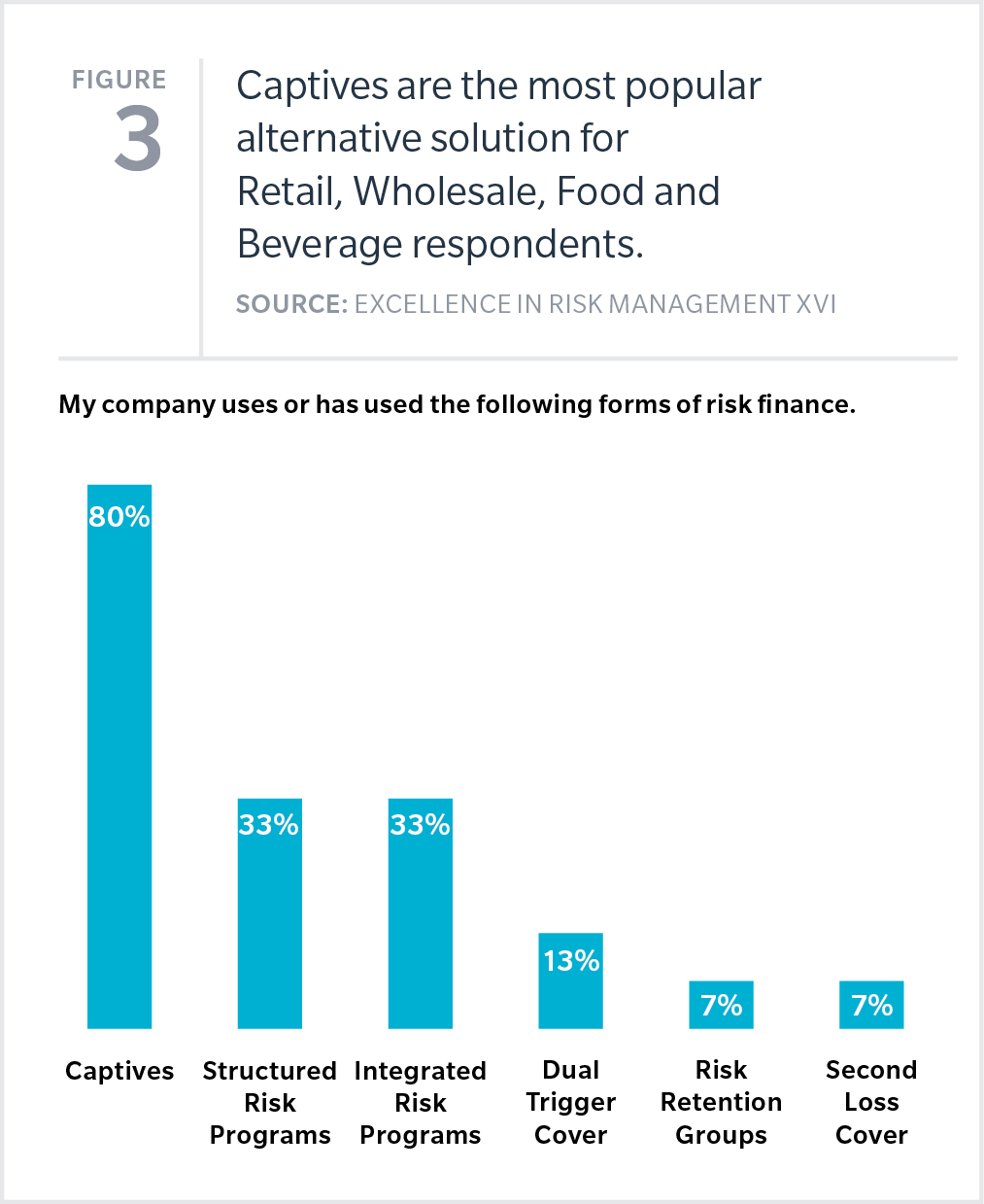 The trend to seek ART solutions is more prevalent among larger retailers, many of which have millions of dollars in catastrophe exposures. Alternative solutions can provide a way to finance risk more efficiently, while reducing volatility and creating opportunities to diversify risk management products.

But there are obstacles for RWFB risk professionals, the most pronounced being explaining the benefits of alternative solutions to others in the organization, a concern voiced by 37% of industry respondents to the Excellence survey.

A popular alternative risk transfer solution that has been increasing in popularity since the mid-1980s is a stock throughput (STP) policy for retail inventory. Traditionally a marine policy, STP allows organizations to insure their inventory throughout its lifecycle, whether it’s in transit or in storage. Close to 80% of Marsh’s retail clients are implementing STP solutions within their insurance portfolios. While some restrict coverage to inventory within their distribution centers and during transit, others extend coverage to stock in their retail outlets.

STP policies have been gaining traction, especially as insureds started seeing increases in their property premiums. Although the STP market is also firming and insureds have recently seen increases in premium costs, marine policies tend to be less expensive than their property counterparts while typically providing enhanced coverage. Deductibles also tend to be lower, and usually come in the form of a fixed dollar amount rather than a percentage, making it easier for organizations to plan ahead to finance that cost. Higher prices, however, have led some buyers to reevaluate their existing STP structures in an effort to ensure the marine market provided the most efficient coverage for their inventory; in most cases, that was found to be true.

Another potential benefit is that, like parametric solutions and some other alternative products, STP policies tend to have a more streamlined claims process due to a simplified evaluation. For insureds, this means they can get their insurance payout more quickly.

And importantly, STP solutions can reduce the risk of interruption in coverage. Traditionally, retailers would have to switch between property policies to cover inventory while it was at a distribution center or in storage and cargo policies while the same inventory was in transit. Aside from the additional paperwork, this approach can carry a risk of errors leaving gaps in coverage. However, because an STP solution typically covers the inventory irrespective of its location, it eliminates this potentially costly problem.

While more sophisticated alternative products, like eventbased triggers, tend to be purchased by larger companies that have strong balance sheets and the ability to make initial capital investments, STP solutions can be a fit even for smaller firms. However, it is imperative to look at these products well before a renewal date; while STP policies require the same data and information that would need to be provided to a property underwriter, it can take time to establish this solution as part of an overall insurance portfolio.