The Six Cs of Captive Value: Focus on Compliance

When we discuss the various areas in which a captive can create value — financial, strategic, and operational — compliance is one of the only benefits that overlaps each category.

Reasons for Forming a Captive Insurance Vehicle — The Six Cs 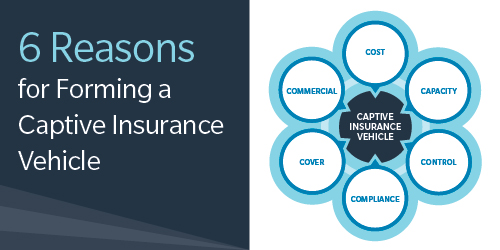 In many industries, organizations are required to show evidence of insurance, but prefer to self-insure the risk rather than place insurance through the commercial market. In those cases, a true policy is needed to demonstrate evidence of coverage to the third parties with which they work. As a formally regulated insurance company, a captive may be able to produce a policy that meets that standard.

In other cases, an organization may choose to set up or use a captive specifically for the compliance it facilitates.

For example, consider company XYZ, which offers shipper’s interest coverage through its business units to cover loss of or damage to goods while in transit. Legal counsel to the client raised concerns about the possibility that this would draw regulatory scrutiny as the coverage “looked” like insurance, but was not issuing policies through a regulated insurance vehicle. To ensure they were in compliance, XYZ used a captive to issue the policies instead.

What if a Captive Cannot Produce a Policy That Meets Regulations?

In some cases, a captive will not be able to produce a policy that meets regulatory requirements. For example, a captive cannot directly write a policy covering third-party business exposures. Or, an insured may require that the policy be issued on “rated” paper to satisfy regulatory requirements. In these instances, a captive can achieve compliance through “fronting,” which involves a licensed, admitted insurance carrier issuing a policy to the insured and reinsuring the risk to the captive.

Typically, the cost of fronting is a fee paid to the insurance carrier, called a ceding commission, as well as satisfying the carriers’ collateralization requirements. Ultimately, the insured receives rated paper from a licensed, admitted insurance carrier, which satisfies regulatory requirements, and the captive still retains most, if not all, of the risk.

Easier regulatory compliance is one of the benefits a captive can offer. If you think a captive vehicle would benefit your organization, work with your tax and accounting teams and other advisors to determine the setup that meets the unique needs of your organization.

The Six Cs of Captive Value